Apple has sent out invites for its typical annual iPad event, along with the tagline “We still have a lot to cover”.  The event will be held on 10/22 at 10 AM PST. This year, assuming all the rumors and leaked images are accurate, Apple will be unveiling the iPad 5 and likely the iPad mini 2. For anyone who has skipped the previous two generations and stuck with the iPad 2 (myself included), the supposedly redesigned 5 will be a nice upgrade.

According to rumors, the iPad 5 is supposed to be lighter and thinner than the previous two iterations, which should hopefully bring the physical specs closer to the iPad 2. Implementing the Retina display on the iPad 3 and 4 came at the cost of additional weight and bulk, but sources say that Apple will be able to cut down the size of the iPad 5 thanks to newer touch screen technology and materials. It should end up looking almost exactly like the big brother of the iPad mini, which certainly isn’t a bad thing.

As far as specs go, the iPad 5 should be housing Apple’s new A7X chip, which would be a modest step up from the iPhone 5s’ A7 and should be easily capable of handling any game or app thrown at it. Rumors also claim that the Touch ID found on the iPhone 5s will be included, and that does jibe well with past iPad releases-Apple usually includes the recent iPhone tech in the latest iPad. Whether the iPad mini 2 will follow suit is anyone’s guess. Both new tablets should be available around Halloween, hopefully sooner.

Apple doesn’t normally allow live video streaming of its events, but many tech sites like CNET and iMore will have live blogs to follow along with if you’re interested. 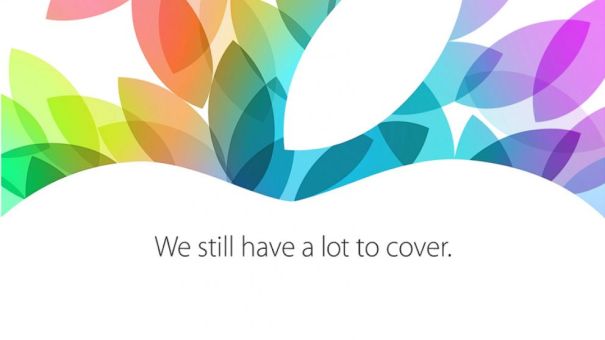 Hello there! Thanks for visiting our blog. My name is Greg Walker. I am a lover of all things technology, but I do have a soft spot for Apple, Nintendo (hang in there!), and Xbox. I also enjoy writing, so I figured blogging would be a natural cohesion of the two.